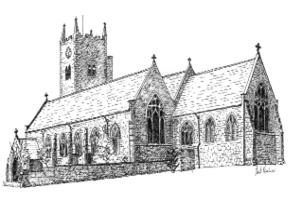 If you enter St Katharine’s Church and turn left into the room at the base of the Tower you will see two large painted wooden tablets attached to the wall. These tell the story of how the Popplewell Charity first began.

In the early 1800’s, Mr. John Popplewell was living in Woodford, Essex. He had connections with the Bolton area as his uncle Thomas Aynscough was buried in the grounds of Bolton Parish Church. He’d visited the Bolton area several times and was moved by the poverty of the working people. So much so that he established Charities at Turton and Bolton as well as Blackrod.

In 1829 he invested £1000 and from the Interest £110 was given for the vicar of St. Katharine’s to distribute every year on December 10th.  This became known as “Dow Day” or “Endowment Day.”  He stipulated that:

£1 to the Singers, £42 to “the poor who are most regular in their worship” and £12 to the Grammar School children.

This school had been established in the late 1500’s, but the building built in 1799 is now part of the nursery and is owned by the Blackrod Educational Trust. John also wanted bread and blankets to be purchased for the poor.

John’s sisters, Ann and Rebecca, later increased this Investment amount by £2160 resulting in a considerable amount of money being invested to bring relief to the people of Blackrod.

In various forms the Popplewell Charity has survived to this day. The Popplewell Consolidated Charities were first established in 1907. There was a Bread Charity and 46 people benefited in December 1914.  There was a Provident and Clothing Club, to “encourage thrift among the poor of the Parish.” It had 121 applicants in 1930.

People saved weekly and a dividend was paid annually.  In 1907, 37 women and 6 men were given clothing and 12 people received blankets.  There was also a Nursing Fund, a Pensions Fund and a Bell Ringers Fund.

At a meeting in 1923, it was decided that a collection be taken annually during the December Service. The proceeds would help in the upkeep of Thomas Ainscough’s family grave.  But as years went by, fewer people were applying for help from these Funds.

In 1952, The Blackrod Popplewell School Foundation was giving awards to students in Higher Education. Some of you may remember receiving an award. It was also giving clothing for good attendance at  Scot Lane End C.E. School and Blackrod Church School.  Minutes show that in 1971 anoraks were purchased at a cost of approximately £4 each. I can remember when I first started teaching at Scot Lane in 1969, going into Wigan with the Deputy Head, Phyllis Stephenson, plus several children and their mothers to chose clothes from C and A’s. Does anyone remember this?

By 1992, students in Higher Education were receiving their grants from the Educational Trust and the Popplewell School Foundation concentrated on giving grants to pupils attending the two church schools in the village.

But unfortunately hardly any money now remains from the Popplewell family’s original Investment. Fortunately, The Educational Trust has supplemented the Popplewell Charity most years since 2002.

After the closure of Scot Lane in 2008, the four best attenders at Blackrod Church School have been given vouchers at the Popplewell Service in early December.

This year this Service will be held on December 6th. Everyone is welcome to come along and support the children.