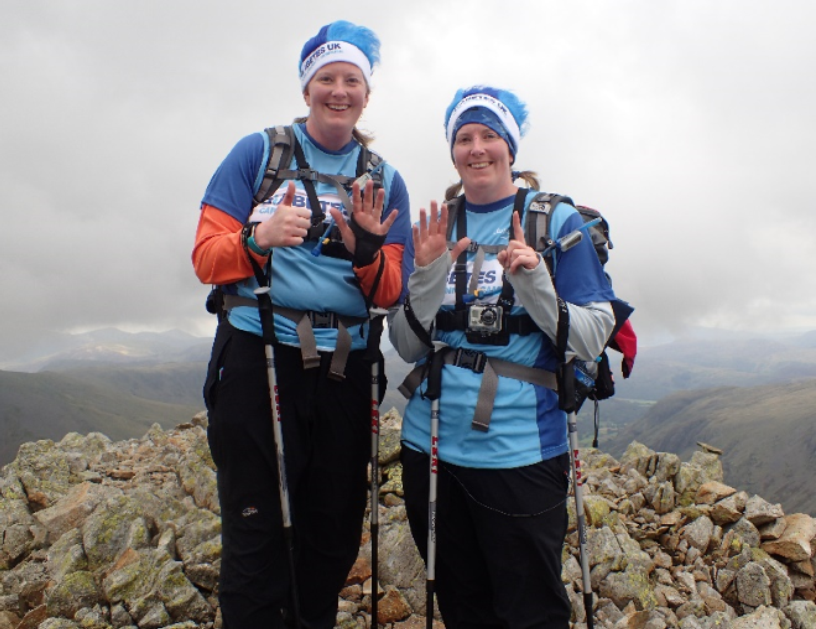 Back in April 2016 our world was turned upside down when we lost our Dad to complications caused by diabetes and sepsis.  He was in intensive care for less than 48 hours when we had the devastating news that there was nothing more they could do.  At first, we were just numb, angry and terrified as to what they future would hold for us as a small family with just us and Mum but we’ve stayed strong and decided we needed a focus.  A challenge of conquering 5 Peaks in the Lake District felt just perfect.  Dad – in his youth – had been a mountaineer climbing the highest peaks of Ben Nevis, Helvellyn and Snowdon in all weathers so how fitting that we could raise money for Diabetes UK by doing something along those lines on September 2nd 2017.  We signed up a year ago and have walked many miles every day, including speed hikes up Rivington and lost over 4 stone between us to give us the best chance of succeeding.

Well the day finally arrived to set off to the youth hostel in Elterwater, our ‘base camp’ for the night before embarking at 6 am the following day.  We met fellow challengers and our leaders who would be with us every step of the way.  It wasn’t long before we headed to bed and tried to get as much sleep as possible before getting up at 4:30am for breakfast and final preparations.  Abilities and experience in the group varied but we worked as a team throughout to make it up not only 5 but 6 peaks!  Starting and finishing at Old Dungeon Ghyll Pub we made our way up the Mickledon valley along fairly steep paths towards our first summit of Rossett Pike (651m).  We were then able to leave our backpacks in a sheep fold so we could climb Allen Crag (785m) a little more comfortably, then it was onto Scafell (978m) – the highest peak in England!  It was a very tough scramble, quite scary at times with scree slopes and so many false summits but we made it and enjoyed Grasmere gingerbread whilst observing amazing views of the Langdales, Ennerdale, Yorkshire and even the borders of Scotland!  3 bagged, 2 to go!

We didn’t stay long at the summit as the weather closed in and it got cold, scrambling down the steep slopes was a challenge in itself but we helped each other and the next peak was scaled within minutes – Broad Crag (934m), as the name suggests, it was a wide plateau of boulders and enabled us to have a little breather.  Number 5 was Ill Crag (935m), a fairly flat and grassy slope leading to another rocky scramble to the summit.  We’d done it!  To finish, we couldn’t miss the opportunity to climb the aptly named, Great End (910m).  This would be number 6 and our final ascent before the long walk back to the pub.  A fantastic challenge and one we will never forget.  Thanks go to the leaders from Charity Challenge, Diabetes UK and all our friends and family for the amazing sponsorship and messages of support.  6 Peaks, 5193m climbed and over 14 miles covered in 12 hours!

Our Just Giving page is still accepting donations so if you would like to sponsor us, please visit //www.justgiving.com/fundraising/5peaksnjvr

Thank you, Joanna and Natalie