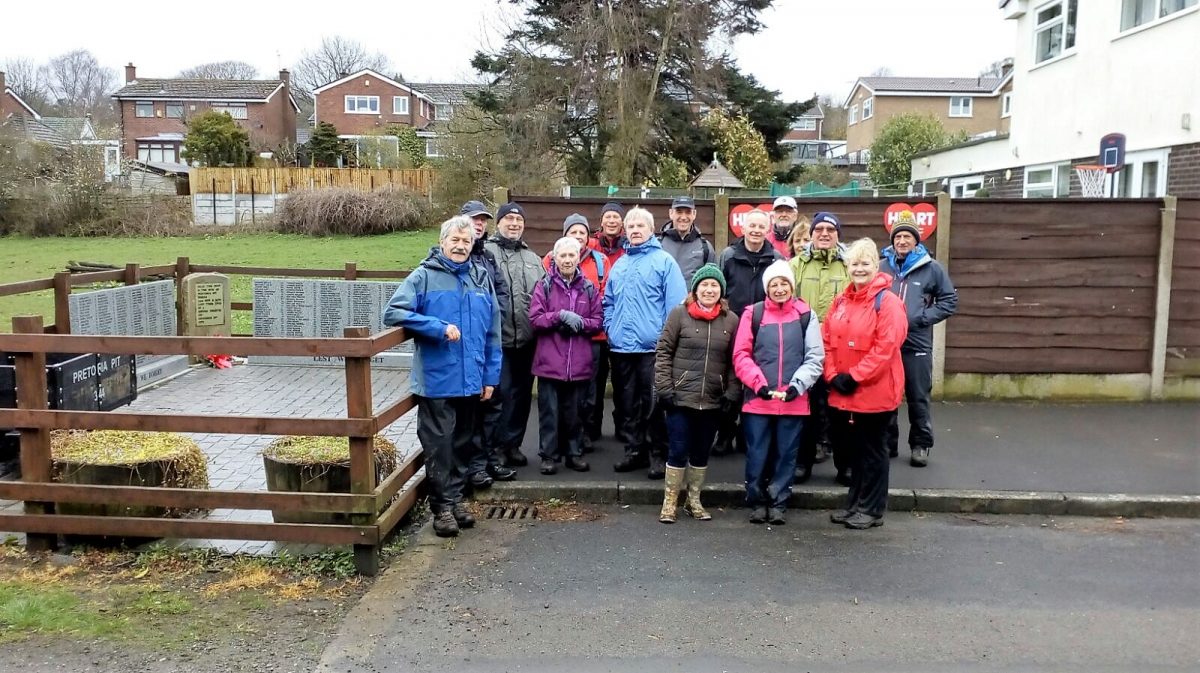 On a wet, miserable morning an amazing 17 people turned up for the walk. We met outside a house on Manchester Road which is adorned with red heart-shaped plaques, a reminder that the land we were about to set foot on is under threat by the developer Peel to build over 1,000 houses and a championship golf course. The lady of the house is a staunch supporter of the group HEART (Hulton Estate Area Residents Together) the campaign against the development on greenbelt Grade 2 listed land. The Hulton estate is steeped in history being owned by the Hultons for nigh on 1,000 years, and the family were wealthy aristocrats.

We started the first half of the walk through the Hulton Park with rain still coming down. The public footpaths on this estate go mainly through farmland with lots of areas fenced off to the public. It is clear from the signs put up by the developer that they do not want you to stray from the paths. There seemed to be many obstacles in the way, including the last stile that required extreme dexterity to overcome the reward, and gave us no choice but to land in an abundance of mud! But we all prevailed and it stopped raining!!!

We made our way through the trees until we reached the remains of what was the Pretoria Pit. The Hultons gained much wealth from the coal under their estate but this was the site of a great tragedy in 1910 when an underground explosion at the pit killed 344 men and boys four days before Christmas. We stopped at the site of Shaft Number 3 where the bodies were recovered, and a brief resume of the disaster was given. Then proceeded to the edge of the estate for a short coffee break at the memorial to the men and boys who lost their lives. The memorial was built in 2010 with funds raised by a local ex-miner to commemorate 100 years since the disaster.

After the break we walked through the housing estate known as Broadway, crossing busy Newbrook Road to begin the next part of the walk at the Cutacre Country Park.  The area at Cutacre straddles the 3 councils of Salford, Bolton & Wigan and 2 or 3 years ago they gave the go-ahead for the development of the business park (Logistics North) that now houses distribution centres of the likes of Aldi, Whistl and soon, Amazon. Even in its present state it is the largest business park in the North West. To appease the local residents, Harworth Estates are creating the 558-acre Cutacre Country Park. The park is still in its infancy and still being created so it will be interesting to see how it develops in years to come.

We did a small loop around the footpaths that have been made, and it is immediately clear how different the landscape is compared to the Hulton estate, i.e. two areas of land – one which has hardly been touched for many, many years, and one that is being developed right now and is more akin to a building site in places. Just before the end of the walk we climbed up the steps to one of the viewing points that have been created, which give spectacular views (on a good day) of the Cheshire plain. But on this particular day the spectacular views were of the vast Aldi and Amazon distribution centres complete with multi-storey car park.

At the end of the walk, lunch was taken in the new Pine Tree Farm pub/restaurant which was built at the same time as the new industrial park at Cutacre. Even on this grey Tuesday in April it was doing a very brisk trade, but we managed to get served quickly and all seated in the same area which had kindly been reserved for us.  Brian

Next walk: Tuesday May 8th: Starting from The Chetham Arms at Chapeltown towards Peel Tower at Holcombe. Meet at The Chetham Arms car park, BL7 0EW, at 9:45am to start at 10am. Ken will lead. If you haven’t walked with us before, please contact the walk leader on 07743576377.